The Paso Robles region of California’s Central Coast is becoming one of the fastest-growing wine areas in the country, producing elevated wines from well-known international varieties, to slightly obscure, emerging varieties, each telling the story of the land. With eleven different sub-AVAs dividing the 600,000+ acres of the diverse region sitting within close proximity to the Pacific Ocean and rising from 700 feet elevation to over 2400 ft, this is an area filled with dozens of micro and macroclimates, allowing cool climate varieties to thrive in one area, and dense, heat-loving varieties to shine in other areas.

Justin, Tablas Creek, J Lohr, Peachy Canyon, Hope Family, Daou, Epoch, and so many more, Paso Robles wineries are showing why this maritime climate just a few miles from the Pacific coast with high temps hitting the 90’s and 100’s in the summer dropping to 50 at night, is so ideal for great grape growing. From powerful Rhone-style reds and Bordeaux variety blends to spicy Zinfandel and bold Petit Sirah, to aromatic, luscious white wines and a tiny bit of cool-climate Pinot Noir grown in high elevation vineyards near the Santa Lucia Highlands, Paso Robles has it all. 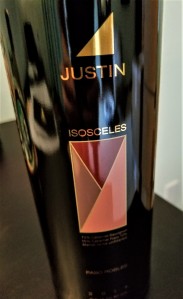 Of all the wines grown in Paso Robles though, Cabernet is king. Almost 40% of all the grape varieties grown for wine production in the area is Cabernet Sauvignon, followed by its Bordeaux brother, Merlot in a distant second at only 14%, and likely sitting in the number two position as it is the ideal blending variety to Cabernet Sauvignon, along with the other Bordeaux varieties. When Justin Baldwin created his Justin Wines in Paso Robles the region was still relatively undiscovered, but the potential was there. The regional pioneer had visited Bordeaux and fallen in love with the wines of Chateau Margaux in the 1970s understanding that the Bordeaux style blend allowed the best expression of the terroir to shine. 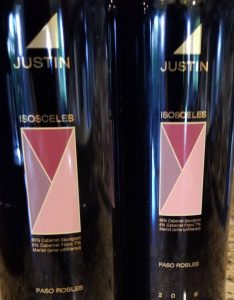 When the vineyard was planted in the limestone soils of the 160 acres Justin Founders Estate Vineyard in 1981 it was always with the goal to produce world-class Bordeaux style wine, influenced by those great wines of Bordeaux, but with complete California style. In 1987 the winery produced the first bottling of Isocolese, their hallmark, flagship wine, the signature representation of the winery, crafted as a homage to the First Growth wines of Bordeaux.

Always a blend of Cabernet Sauvignon with Merlot and Cabernet Franc, over the past 30 yeast Justin Isosolese has proved that quality lies in the vines of Paso Robles, creating a wine with elegance, balance, structure, and rich complexity. In tasting the 2016, 2017, and current release 2018 Isocolese side by side you immediately recognize the care that is put into the wine. The current release is ready to enjoy upon release, but with just a bit of additional bottle aging, the palate softens, with tannins becoming nicely integrated, rounding out the full-bodied palate layered with ripe black cherry, black plum, and blueberry, layered with Asian spice, dried leather, black licorice, and cigar box, with a nice bit of dark chocolate to finish out the rich, inviting wine.

Hope Family Wines originally started over 35 years ago when Austin Hope’s parents, 2nd generation farmers, moved from Bakersfield to Paso Robles to plant and grow apples and grapes. They soon focused completely on planting wine grapevines in a time when there weren’t many vineyards in the area and those that were mainly supplied grapes for bulk wine to wineries further north. With much dedication Austin’s dad worked to change that, becoming a founding member of what would become the Paso Robles Wine Country Alliance, establishing the region, and helping it become known for producing quality wine instead of simply the base of bulk wine. For Austin, his focus was always in the vineyard, graduating from Cal Poly in San Luis Obispo, working initially with Chuck Wagner at Caymus, eventually beginning the winery focusing on ensuring their estate vineyards, and many of the vineyards they source fruit from for the winery are SIP (Sustainability in Practice) certified. The goals of SIP are to promote vine health, raise wine quality, and ensure that growers can remain profitable over the long run. Since 2009 the estate vineyard, Hope Family Vineyard, which produces all the wine for their Austin Hope wines has been certified sustainable SIP. In 2017 Austin Hope created his inaugural vintage of Austin Hope Cabernet Sauvignon, telling the story of Paso Robles and his dedication to his craft in the glass. Austin Hope Cabernet Sauvignon ($56), from a blend of grapes grown in the Creston, Estrella, Adelaida, El Pomar, and Geneseo sub-AVAs, is bold yet velvety, rich and round, with a nice pop of freshness wrapped around balanced, firm tannins. 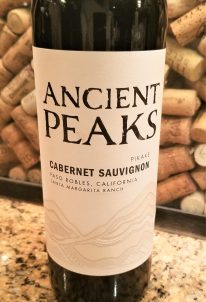 From the Santa Margarita Ranch sub-AVA in the southernmost part of the Paso Robles AVA, Ancient Peaks Santa Margarita Vineyard showcases a vast diversity of soils of the region that bring complexity and character to their approachable wines. Their unique location, just 14 miles from the Pacific bringing a maritime climate to their expansive vineyard, ensures wines produced have freshness and vibrancy, a key trait of vineyards influenced by cool ocean breezes ensuring a long growing season, allowing the fruit to develop slowly, with full flavors and phenolics, while maintaining freshness. Ancient Peaks Cabernet Sauvignon ($22) reveals the quality and affordability found in Paso Robles, melding ripe black fruit, graphite, licorice, and toasted spice notes like nutmeg and cinnamon. Pretty, plentiful, and appeasing, a perfect wine to enjoy any evening. 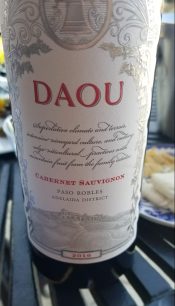 Born and raised in their early years in Beruit, then fleeing to France when Lebanon became a war-torn country, inseparable brothers Georges and Daniel Daou developed a taste for some of the finest wines of France, a taste they took with them to California to pursue their education and career. After selling a successful network technology business in California in the late 1990s the brothers purchased a majestic mountain rising 2200 feet above sea level in the Adelaida District of Paso Robles.

This had been the Hoffman Mountain Ranch vineyard and winery, owned by a California cardiologist who brought the great André Tchelistcheff to the mountain to produce world-class wines from Paso Robles, really the first in the region. Tchelistcheff said this location was a “jewel of ecological elements,” and though the wines produced then were considered very good, it was when the Daou brothers came in and rebuilt the original winery, honoring traditions begun before them, but also modernizing the site, allowing for its full potential to shine. Daou Mountain is truly one of the most beautiful views in California wine country, and the vines that create the view produce stellar wines with a true sense of place, character, and style.

Daou Estate Cabernet Sauvignon ($95) tells the story of this land, produced completely from free-run juice from fruit grown on the estate, and aged for 20 months in predominantly new French oak barrels. The wine opens with a slightly floral note of lavender and violets, followed by woody sagebrush and licorice, melding harmoniously into black currant, black cherry, and ripe plum. Nicely balanced, with structure and concentration, and a nice note of freshness leading to a silky finish.

With the goal to simply create stellar wines from great vines, EPOCH was born in 2004 from the passions of dedicated wine lovers Bill and Liz Armstrong. Lovers of hearty reds, EPOCH focuses on Rhone and Spanish varieties, particularly sun-loving Mourvedre, Tempranillo, Syrah, and Grenache. The EPOCH Estate Blend ($60) showcases their expansive estates covering 743 acres across the York Mountain sub-Ava and Willow Creek sub-AVA, with peppery, spicy, earthy Syrah leading the blend. EPOCH Creativity allows for true vintage expression, as the wine is never the same from year to year, almost being a winemaker choice based on what varieties stand out from the rest in a given year. One year it can be a 100% Syrah or Grenache wine, the next a classic Spanish blend, or 100% Zinfandel, or like this year, the 2018 EPOCH Creativity from fruit grown exclusively on York Mountain blends 95% Viognier with 5% Roussanne for stone fruit, white flower, and soft herb-filled wine. 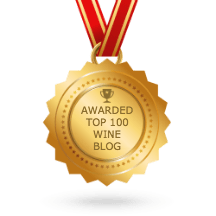