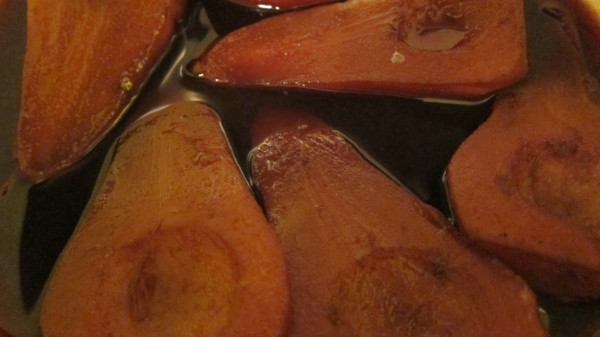 I am not a huge sweets person, preferring to drink our dessert rather than eat it…but every now and then I am inspired to create something sweet, usually with fruit, and if I can add a spirit it is that much better.  We had some friends over Friday night and instead of just slicing up some pears of a cheese platter at the end of the meal, I decided to poach them in a mixture of port, red wine, balsamic vinegar, a touch of honey and a bit of rosemary (I love adding a bit of savory to something sweet.)  After several hours of slowly poaching in a very low oven they were soft and fully infused with the succulent concentrated wine flavors.  The marscapone cream added just a touch of dreamy cream without adding additional sweetness (like an ice cream would.)   Though these take time to cook, it is probably one of the easiest dishes to create with a good deal of wow appeal. 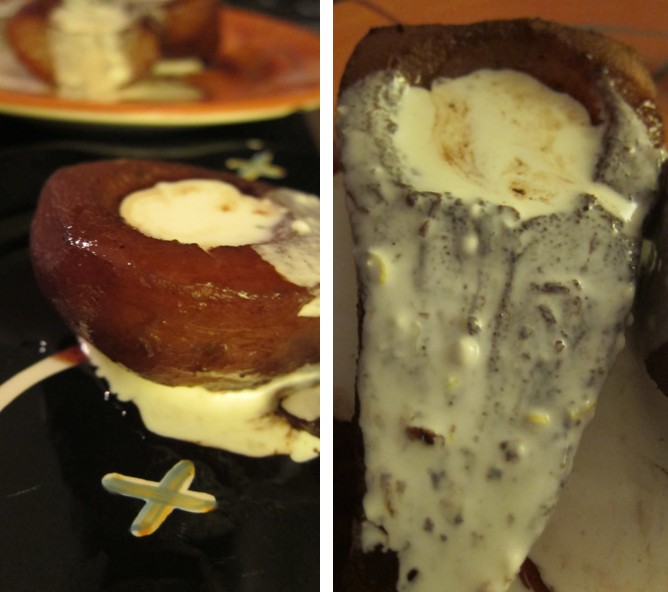 Port Poached Pears with Mascarpone Cream
Ingredients:
For the pears:
4 Bosc pears – make sure they are not overly ripe or they will just fall apart
1/2 cup port wine
1 cup red wine (I used a Pinot Noir that we had bit left in from the night before, but any wine will do)
1/2 cup balsamic vinegar
1 1/2 tablespoons honey
2 teaspoons cinnamon
1 5-6 inch piece of fresh rosemary (I just put the whole stalk in and then removed after about 2 hours of cooking)
1 teaspoon cracked pepper

Preparation:
Pre-heat the oven to 200 degrees. Peel the pears and cut in half.  Scoop out the seeds with a spoon or melon baller.  In a medium size dutch oven (you want enough room on the bottom for all the pears to rest in a single layer) bring the port, wine, vinegar, honey, herbs and spices to a rapid boil.  Once they have boiled add the pears and reduce the heat to a low boil and cook for about 2 minutes, then place the lid on and put in the oven.  Bake for about 2 hours in the 200 degree oven, turning once half way through cooking to make sure both sides have been emerged in the liquid.   They can sit in the liquid in the oven until ready to serve, just turn the oven off after about 2 hours, once the pears are nice and tender, and remove the rosemary stem.  Meanwhile stir the ingredients for the mascarpone cream together and set aside.   When ready to serve place 1 pear half on each serving plate and then place the Dutch oven back on the stove, heating to a boil to reduce the liquid.  Reduce by about half until it is slightly syrupy, and drizzle a bit on each pear.  Then drizzle a bit of the cream on each pear and serve.

Magical night filled with fabulous food & dearest friends. When in #NYC @rezdoranyc is a must. Bravo @stefano_secchi, we are so incredibly proud of all you are achieving! #italianjoy 🥂🇨🇮🍷 #everyglassisanadventure
Fabulous night of opera with dearest friends. Fantastic production #gregorykeller #laboheme #metropolitanopera 🥂🎭🍾