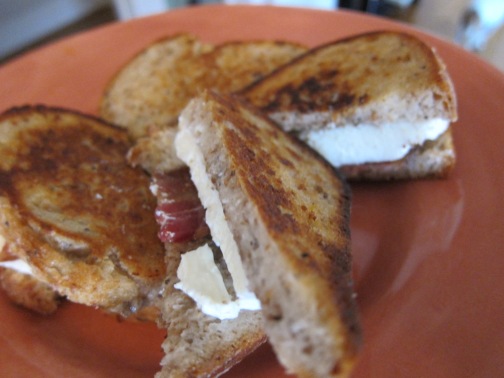 When I was in Spain a few years ago I went to an incredible tapas bar owned by Chef Carles Abellan – Tapas 24 in Barcelona and had this very Un-Spanish dish….but to this day it is one of the best bites I have ever tasted….mainly because the ingredients are so few and so simple yet of the highest quality – Iberico ham, fresh mozzarella and black winter truffles sandwiched between two slices of fluffy white bread, grilled and cut to look like cute bikini tops. Since then I have recreated this dish dozens of times, making it on bioche instead of white bread was a big hit as was including super crisp bacon instead of serrano or Iberico ham…because everything is better with bacon. Make it on brioche bread with bacon and your dinner guests may never leave. Pair with a light white, like Spanish Verdejo or a Fino Sherry, like the crisp and slightly herbaceous Tio Pepe, or of course, a Gin and Tonic….the cocktail that continues to thrive throughout Spain. 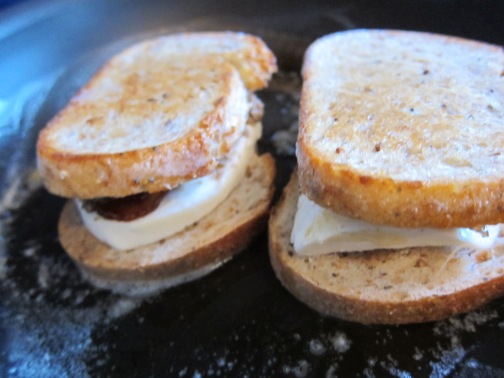 Preparation:
Spread half an ounce of the truffle paste on 1 slice of bread. Lay a slice of mozzarella on top. Break the bacon strips into pieces and lay the equivalent of 1 slice on top of the cheese.  Top with another slice of bread.  Lightly butter the outside of each side of bread.  Heat 1 teaspoon of the bacon fat in a skillet over medium heat.  Lay two sandwiches in the pan and grill until browned on one side.  Flip and grill until the other side of the bread is browned and the cheese is getting gooey. Remove from the pan and cut on the diagonal, then slice again into triangles, or bikinis. Serve immediately while cheese is hot and melted.

#cheers🍹🌴🍸
I am not saying it was great, but it was very large and very cold. #cheers #tastytuesday 🥂🌴🍾🍷