I was recently in France and saw a beautiful dish that intrigued me enough to come home and make a version. It was a veal roast with garlic, herbs and cream. Not being much of a veal person, I opted for pork instead of veal, using a pork shoulder and generously seasoning it with garlic, rosemary and fresh thyme. Make sure your piece of pork is trimmed, but not completely cleaned of all fat. And, take the time to brown the meat well before placing it in the oven, similar to the short ribs, as the caramelization of the meat will add incredible flavor, while rendering out a good amount of the remaining fat. Add a touch of brandy to the pan-gravy for an extra element of luxurious deliciousness.

Preparation:
Preheat the oven to 300 degrees. With a paring knife carefully cut small slits around the pork, inserting a thin slice of garlic to flavor the meat. Then carefully cut the pork in half, carefull not to cut all the way through and stuff the inside with several slices of garlic, a few stems of rosemary and thyme, and season generously with salt and pepper. Close and using kitchen twine tie the pork from top to bottom to keep the herbs inside and ensure even cooking. Season the outside with salt and pepper. Add the butter and oil to a large Dutch oven over medium heat. Add the pork and brown on all sides. Do not rush this process as this will help render off access fat. While the meat is browning prepare the aromatics. 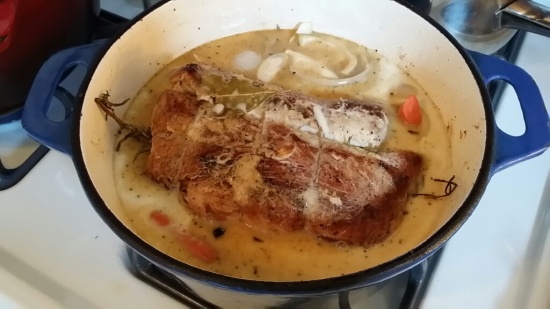 After the meat is browned add the onions, celery, carrots, red pepper flakes and remaining herbs to the pot, and gently pour in the milk and cream. The liquid should cover the pork. Place in the oven and roast for 30 minutes, then flip the meat over and roast another 20-30 minutes or until a meat thermometer reads 150 degrees when inserted into the thickest part of the meat. Remove from the oven and from the pan and place the pork on a platter and cover with foil. This will help the meat continue to cook while keeping it juicy. Strain the liquids remaining in the Dutch oven into a sauce pan and place on the stove over medium high heat. Bring to a boil to reduce the liquid by half, then add the brandy. Bring back up to a quick boil to help burn off the alcohol then simmer until ready to serve. When ready to serve (after the meat has rested at least 15 minutes,) cut the twine off and remove the herbs inside the pork. Then slice the pork in thin pieces and serve on top of mashed potatoes with the sauce drizzled over all.